Linda recently appeared at Feinstein’s/54 Below for four nights where she performed many of the songs that are on IF YOU SEE ME. Below is a review of the wonderful show enjoyed by four lucky audiences.

Posted on May 14, 2018 in Music Reviews
By Marilyn Lester

Singer and actress Linda Eder has a dedicated, ardent, loyal following and it’s easy to see why. Eder has a charismatic stage presence and the talent to back it up. She’s a Broadway award winner who’s also forged a successful career in cabaret and on concert stages. Plus she has 18 albums to her credit. Appearing at Feinstein’s/54 Below, she’s promoting her latest, CD, If You See Me, presenting a program of album highlights and celebrating her musical theater career.

Eder’s entrance was on the dramatic side. Breathlessly rushing in to the late-starting show she quickly explained she was stuck in traffic and made up for it by launching into a jazzy medley of “The Man I Love,” “Just in Time” and a slow tempo “Before the Parade Passes By.” She could have used her power voice to send that particular tune to the stratosphere, but she chose another way. In focusing on the lyric, the words took on meaning. This skill is one of Eder’s strong suits. She has the interpretive ability of a Mabel Mercer (that legend who, when her voice was gone, used parlando to bring her material to blazing light). Eder has an intuition for the music. She knows when to power up and power down, so each song achieves maximum value. Eder also has jazz chops beneath a largely Broadway style of delivery, evident on “Till You Come Back to Me” and a swinging “Down With Love.”

There’s gentleness to her demeanor and in her speaking voice, which has a light airy tone with hints of her native Tucson, Arizona in it. Whatever the magic, she holds an audience. This was no more apparent than on one of her most-requested numbers, “Vienna” (written by former husband, Frank Wildhorn). Wildhorn was also represented in the repertoire with “Someone Like You” (to which she applied a truly boffo finish) and “Bring on The Men” both from her Broadway debut show, Jekyll & Hyde.

A strong element of Eder’s set was the band. Her sextet was not merely backup, but in partnership with the singer. The result was spectacular musicianship all around. Arrangements by music director and pianist, Billy Stein, were fresh and suited Eder to the proverbial “t.” The slow arrangement of Losing My Mind,with piano only, made for an aching, torchy interpretation of the song. On an up-tempo “They Can’t Take That Away from Me,” the brasses provided an effective counterpoint to the melody. And choosing to use the rhythm section only for a slow-tempo “Smile” also brought the best out of that tune in emotive quality, with David Finck on bass and Eric Halvorson on drums. A flute interlude on “bring Him Home” by Aaron Heike (who also played saxophone) was splendid. Also demonstrating sublime musical chops were Tony Kadleck on trumpet and keyboardist James Olmstead.

Eder’s closer, a gender-bending “Man of La Mancha,” with the band in full swing was truly a showstopper and showpiece in every sense. Yet it was a very personal and low-key encore, “I’m Always Chasing Rainbows,” to Stein’s piano accompaniment that sealed a superb evening of music and song with a feel-good glow. 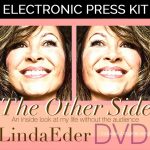 EPK: The Other Side DVDUncategorized